“Call of Duty: Modern Warfare 3″ has maybe the best campaign in the MW series, and the multiplayer is swiss-watch-smooth, but hot damn did the graphics take a nose dive from the ugly tree and hit every branch coming down. How do you release this thing to a world that has seen “Uncharted 3,” and keep a straight face? You’re richer than Croesus, Activision, you can afford to do some bloody texture work. I love MW3 long time, but the next one better be prettier, or I’m not buying it.

Stop right there, COD fanboys, I already know the words that are about to come out of your mouths: “60 frames per second!” And yes, a clean 60 is nice for death match, but we don’t need it for campaign, so there’s no reason they couldn’t let it slip to 30 and pump up the lighting and particle effects; and by the way, 30 fps is more cinematic anyway. Besides, all that smoothness kind of makes everything look weightless and fake sometimes, like a 120 Hz refresh rate on an HDTV.

The problem is stagnation: the engine COD runs on hasn’t seen a massive overhaul since MW1, and in that time, standards have gone up. “Modern Warfare” was gorgeous for its day, but MW2 and “Black Ops” were just okay, and now with MW3, the franchise is finally behind the curve. As gripping as the campaign is, and it really is terrific, I kept getting yanked out of it by muddy, unimpressive textures. The cityscape of New York was particularly bad in this regard. 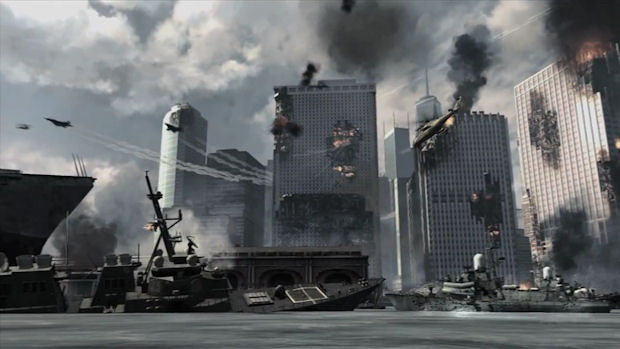 Does this really look good enough for anyone?

I want my shooters pretty. Maybe that’s shallow, but I want it anyway. Remember that these games are supposed to be immersive, and technical excellence is an important part of creating that effect. I make exceptions for things like the Source engine, but if anyone has any illusions about “Call of Duty” being on par with “Half Life,” let me disabuse you of them now. And hey, “Portal 2″ was pretty damned beautiful, so suck on that.

Now I know that MW3 is going to make a truckload of money anyway, so maybe the joke’s on me for even thinking they care, but they should. No matter how rich and successful you are, Sledgehammer/Infinity Ward, you’re still artists, and craftsmen, and you didn’t get to where you are by taking the path of least resistance.

You made a great game here. I just hope you’re not getting lazy on your throne.

it’s not worth remembering, the way things used to be between you and me