Versus: Battlefield 3 Vs. MW3

Today we pit MW3 against its industry rival, “Battlefield 3.” I’m sure you’ve been wondering why this hasn’t been a “Versus” article earlier, but I didn’t want to write it until I owned and had thoroughly played both titles. Now I have, so now I can write it. 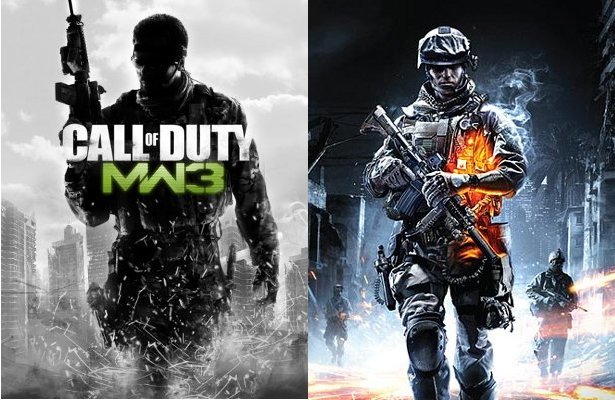 If you’re new to this, it’s simple: I argue both sides of an issue, and leave you to decide which emerges victorious. Although I usually feel one side is stronger, I’ll almost never reveal which, especially since the process of writing these often changes my allegiance.

Here we go: is “Battlefield 3″ or “Call of Duty: Modern Warfare 3″ a better game? Hit the jump.

“Modern Warfare 3″ is a fat, tired old miser who’s been on the throne too long. “Battlefield 3″ is a better-looking, better-sounding, deeper, and more rewarding play experience. Period. If you want mindless deathmatch, we got that, but if you want a deep, strategic, chess-like wargame, we have that too. MW3 could never even muster a comparison to checkers.

“Battlefield 3″ surpasses “Call of Duty” for two simple reasons: first, the new engine. We all know BF3 looks gorgeous, it’s frankly one of the most immersive games ever made, but the sound may be even more stunning. And aside from the sheer pleasure of experiencing it, such high quality audio helps with hearing enemies sneak up on you, as well as eyeballing distant tanks or jets (did I mention we have those?). It makes a tactical difference.

Ditto for Frostbite 2: crumbling walls and ceilings make for dynamic combat MW3 couldn’t dream of. Enemy got away by running into a building? Blow the building up! Need a quick escape? Shoot a grenade into a wall! Once, I was standing on a roof, someone blew up the building, and I fell through two stories and landed, badly wounded but alive. Suck it, Infinity Ward (or Sledgehammer, or whatever trained monkeys bang out code for Activision now), you and I both know you couldn’t ever offer that.

The second reason BF3 trumps MW3 is gameplay depth. Organizing players into self-sufficient squads who can carry out objectives and support one another aside, the inclusion of vehicles and massive maps means it takes much longer for any given map or game mode to get boring. MW3 loves to tout how many different game modes they have, but they’re all variations on the same twitch-fest. BF3 is a thinking man’s game: playing “Rush” is very different from “Conquest,” and both are very different from “Deathmatch” or “Squad Rush.”

And before they let you get all excited about “Create a Class,” remember that it’s surprisingly linear, boiling down to a choice between sub-machine guns and autos, maybe the occasional shotgun. BF3 offers distinct, fully customizable class types: assault, recon, engineer and support. Each has vastly different weapons, from sniper rifles to mini-guns, and completely unique abilities, from repairing friendly vehicles and destroying enemy ones, to calling in air strikes and spawn beacons; hell, medics can even revive dead teammates. You wanna talk about a game fitting your personal play style, BF3 does that in spades.

MW3 is like a trust fund baby: living off the riches of past generations, marking out nothing new for itself. If collecting dog tags is worth $60 to you, then go with Christ and play into Activision’s little Ponzi scheme. But just know that I’ll be laughing at you from my FA-18 Super Hornet as I streak across the sky.

“Battlefield 3″ is very pretty…in theory. Not on an Xbox 360, mind you; you’ll have to install a 2 GB texture pack just to capture a shadow of those videos you saw from E3. Maybe if you have a PC it’ll look better, but you better have a SkyNet system cause otherwise you’re looking at “Texture Detail–Medium” in your options menu. No, my friend, the game that spawned all those incredible trailers won’t be making an appearance on your humble little gaming machine. It’s too good for you.

Let’s say you’re okay with that; maybe graphics aren’t the end of the world. Then how would you feel about EA’s clumsy manhandling of their servers turning Matchmaking into a living nightmare? Believe it. There has never been a more hilariously ironic menu option than BF3′s “Quick Match.” On the other hand, if you play “Modern Warfare 3,” you’re in a game, guns blazing, in under a minute flat. This isn’t our first rodeo. Also, there’s a reason “Modern Warfare” is an MLG standard: we got this down. Weapons are balanced to a fine point, the combat is fast and furious, the frame-rate is rock-steady at a blistering 60 fps. This is pure competition, balanced near perfectly, unencumbered by game-breaking noob magnets like tanks and helicopters. You wanna know which of your friends has the fastest draw, the surest aim, and the smartest combat prep, you come to us. If you’d like to play a poor imitation of “Flight Simulator” while getting pot-shotted by snipers, by all means, there’s BF3.

Also, “Create a Class” and leveling up (which we invented, by the way), is still fun as hell. You name your own class, your design it from the ground up to play how you want. BF3 requires you modify the classes they give you, the menus are confusing and un-intuitive, and you’re required to work your way through different weapons chains for each nationality. As usual, DICE has grand ideas and talks a big game, but they don’t seem capable of sticking the landing.

And have you seen how many game modes we have? Ground Control, Kill Confirmed, Free For Fall, Search and Destroy, Capture the Flag, Infected, Drop Zone, the list keeps going. BF3 has Conquest and Rush and that is seriously just about it. Are we the only ones getting bored with blowing up M-COM stations?

DICE is a fine company, but if “Mirror’s Edge” tells you anything, it’s that they’ve got big ideas they can never quite deliver on. BF3 might look and sound good, but it’s full of rookie mistakes and game-breaking attention-getters. When you’re looking to compete online, you need to be in the hands of professionals. That’s what we are.

this is not a productive area of discussion