I think we can all agree that the new Batman VG franchise (Arkham Asylum, Arkham City) from Rocksteady may be the freshest and best use of the Batman license since director Christopher Nolan took up the mantle in 2005 with Batman Begins. However, after playing a substantial amount of Arkham City and falling deeply in love with every moment, I’m now confused as to how I feel towards my anticipation for Nolan’s The Dark Knight Rises. And of course I’m comparing apples to oranges because the game is a completed product, while TDKR is a work-in-progress.

But with the recent TDKR prologue released on select IMAX theaters creating more bad press than good word-of-mouth, my impression of Chris Nolan’s Batman is somewhat tainted. How can this be? Read on!

1) Arkham City’s Bane is how I remember Bane 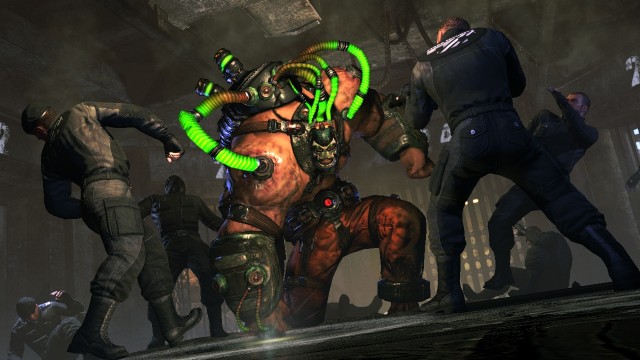 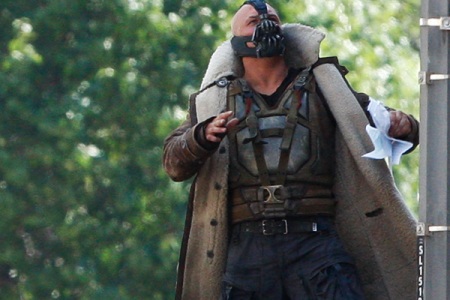 And yeah, you could say I’m being glib as one’s a comic fantasy versus a more realistic approach. Both have superhuman strength, an incredible IQ and a predilection for hurting Batman. However, in the game I could…

2) Understand what Bane is saying

Arkham City’s Bane lets me see his mouth and is quite intelligible in his word choice.

If you’ve seen the incredible footage from the IMAX TDKR prologue, you’ll know that you can’t understand anything Nolan’s Bane is saying. But this can be attributed to: his face mask, the mask the CIA agents place over his head, the rising score, the airplane ambiance, his wheezy German-ish accent, and a bunch of chanting (well, yeah, that is part of the score I guess). This can and probably will be cleaned up in the next seven months before release. Hell, there’s a rumor floating around that a new sound mix has been floated down to IMAX theaters as of this writing.

But we can stand to be sensationalist for one more reason:

In Arkham City, the “Fragile Alliance” side mission tasks you with destroying six Titan containers for the hulking Bane. Titan, if you remember, is the green goo that Bane’s all jacked up on and the goo that created the hulking Joker at the end of Arkham Asylum.

Well…Bane sorta lies and steals the Titan for himself. Motivation: clear.

In TDKR prologue, Bane gets himself captured by mercenaries, to board a plane under CIA rule and find out what a doctor is saying about him. He crashes the plane after pumping the doctor’s blood into a dead body. What?

Of course, that just explains the first six minutes of the film. But that’s all I have to go on until July 20th and as you can see, I get incredibly impatient and snarky when I want answers now. In the meantime, I’m loving Arkham City.

The last time Bane was portrayed in film