Who Cares About Final Fantasy Anymore?

Final Fantasy XIII-2 is hitting this week and reviews run the gauntlet of “meh” to “this makes up for Final Fantasy XIII!” No, it doesn’t. See, Final Fantasy XIII-2 doesn’t make up for the original – released two years ago – the game’s meant to replace it. Reviews report – and the demo confirms – a laundry list of improvements over the original: speedier battles, more sidequests, monster raising, towns, dialogue choices, quicktime events, DLC, replayable sections, etc. With so many added elements, this sequel feels like a rushed apology. Hell, there are barely any FMVs this time around – something Final Fantasy has been known for since 1997! But, with this new release, does anyone care about the FF brand with anything more than a passing interest now? See, we’d argue that Final Fantasy in the United States hasn’t been relevant since late 2001. Follow our logic of the major releases:

Final Fantasy XI (an MMO) released 2002-2003 for a number of systems. PS2 users – spouting a bigger user base than the Xbox – don’t quite understand the hard drive/internet requirement. Doesn’t sell as well.

Final Fantasy XII – released 2006, just as the PS3 and Wii are released. New battle system divides gamers who feel control was taken from them, when really Square tried to eliminate how often you press X.

Final Fantasy XIII – released 2010, after being announced FOREVER ago – Hell, you can remember what happened there, with its corridor gameplay and numerous cutscenes. Read Gamasutra writer Christian Nutt’s eloquent take.

Final Fantasy XIV – (an MMO) released 2010 – One of the biggest botches in MMO history. So bad were the reviews, that Square Enix suspended the monthly payments for a time being, changed producers and vowed to release Final Fantasy XIV Version 2.0 later this year or early next year.

That leads us to today. Based on this quick and dirty timeline – we neglected to mention FFX-2 ‘cause it was lame – we’re able to imprecisely ascertain that Final Fantasy THE BRAND hasn’t been all that relevant to the mainstream since 2001. And what’s the most important thing that happened in the past 11 years?

A shift towards Western gaming appeal. Western developers like RPGs and American gamers like action games. The two have been smushed together for years. But Western developers have Western sensibilities on storytelling, swiftly getting the point across before returning you to the killing once more. Call of Duty, Halo, Mass Effect, God of War, everything. Gamers want an easy-to-digest story much like how American action films are digested. Also, a new generation of gamers were raised on this stuff, no matter how much myself (as a 28-year-old) grumbles about the good ol’ days.

Final Fantasy has been growing steadily irrelevant over the last decade and JRPG gaming has lost the splendor the niche enjoyed from the RPG explosion of the mid-90s to early 2000s in America. However, the genre is now relegated back to the niche designation. I desperately wanted to love FFXIII. I play the game from time to time when I just want something relaxing where I don’t play an intense action game before I go to bed. And where I hit the wall is the storytelling. 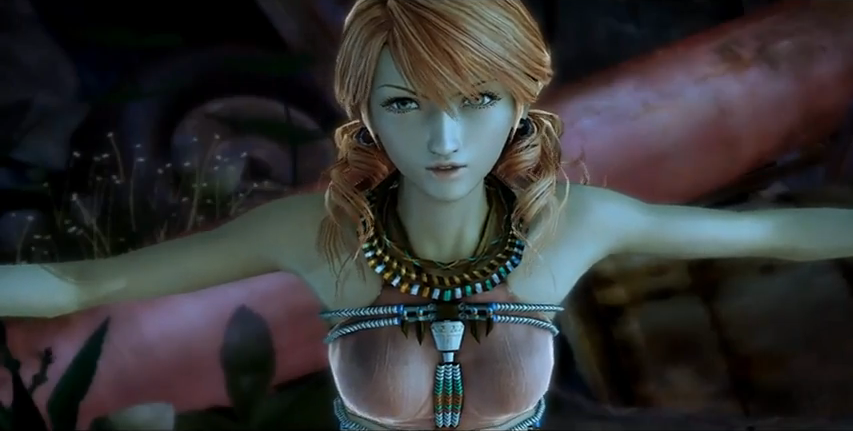 This isn’t Square Enix’s localization department’s fault, it’s the fact that Square Enix storytelling is fucking terrible (obviously IMO). The voice acting is bad because the writing is bad (and really, the FF writing has always been cheesy). The story is difficult to sit through because the writing is bad. And what we’re left with is endless cutscenes where Square Enix really wants us to watch their Final Fantasy movie. Guess what? People are sick of never-ending cutscenes now. You can’t sell a game on the full motion video you’ve crafted for years because that shit is way too common (and usually done more time-effectively with the in-game engine). No one (meaning the mainstream with shit to do) cares about confusing Japanese sci-fi storylines with miserable characters with even more terrible things to say.

So imagine two years ago when people who haven’t played the MMOs and missed FFXII because of their new systems played FFXIII and got a hunk of disaster. Now flash forward to right now and the controversy surrounding XIII and XIV. It’s incredibly easy not to care about this franchise anymore or even bother with XIII-2, especially since the series hasn’t felt relevant since 2001 in America. What chance do young gamers have if they’re surrounded by reviewers grumbling about the latest Final Fantasy entries, while Square Enix continually re-releases the older games (that many have never played)?

Before you grab your pitchforks, keep in mind, I do care about the FF brand (I grapple with whether to get XIII-2), but then I remember what my time is better spent doing or playing – Skyrim, Zelda, Mass Effect, cleaning my kitchen, writing the great American novel – anything other than watching terrible sci-fi J-pop.